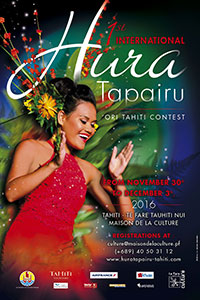 For several years now, the practice of ‘ori tahiti has benefitted from a growing interest and appreciation worldwide to the extent that the discipline’s enthusiasts have been working their way to French Polynesia in an ever-increasing number, seeking to appear and/or to get trained with the locals. Based on this observation, Te Fare Tauhiti Nui – Maison de la Culture launches a traditional-dances contest adapted to small formations made out of ‘ori tahiti fans from abroad and called « Hura Tapairu international ». The opening of such contest pursues two objectives: to give international and non-residents’ groups the opportunity to appear in Tahiti on one hand and to promote Polynesian culture while assessing its worldwide exposure on the other hand. As a result, and within the compass of the present contest which fosters creativity, groups will showcase original works that are inspired by French Polynesia cultural heritage.

Sponsor of the 2015 Hura Tapairu